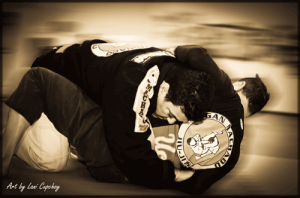 Brazilian Jiu-Jitsu focuses on grappling or ground fighting. It is based on the principle that a smaller and weaker person will be more likely to survive against a bigger, stronger assailant by ‘taking the fight’ to the ground and using techniques based on leverage and body mechanics (e.g., joint locks and choke holds) to defeat the attacker.

In its self defense application, BJJ emphasizes survival first and defeating the opponent (by submission) second. Because it is based on grappling techniques via leverage rather than striking and over reliance on speed and body strength, BJJ is an ideal martial art for both women and men of all ages regardless of their physical size or athletic abilities.

While it is expected that most altercations end up on the ground fairly quickly, a BJJ practitioner’s main focus is to close the distance, take the opponent down and keep him/her there to reduce the attacker’s ability to strike. A BJJ practitioner will then use leverage and efficient technique to achieve different ground positions of control. In doing so, the practitioner tires the opponent while looking for openings and mistakes before executing a submission technique.

Training in BJJ includes drilling (i.e., practicing specific techniques on a non-resisting partner) and sparring (commonly referred to as “rolling,” or attempting techniques against a fully resisting partner) as well as general cardio, agility and strength conditioning. Practitioners tend not to strike each other while rolling but rather focus on executing proper technique. This can enable more frequent training because it reduces the chance of injury. Practitioners may also work together to demonstrate techniques to each other and try them with different degrees of resistance. This creates a realistic learning environment where the results and feedback are immediate.

BJJ is one of the fastest-growing martial arts in the world today. Practitioners develop highly effective self defense techniques along with personal fitness and a sense of community with other practitioners. BJJ is also used very successfully in Mixed Martial Arts (MMA) contests and grappling competitions. We invite you to give it a try and see for yourself!

Rigan Machado is a living legend in the world of Brazilian Jiu-Jitsu and is considered to be one of the greatest grapplers of all time. Master Rigan holds the prestigious 8th Degree Red and Black Belt and is nephew of the Legendary Grandmaster Carlos Gracie. We are proud to be an affiliated academy under his direction.