A Little About Sambo

An acronym for “SAMozashchita Bez Oruzhiya” or “Self-defense without weapons”, Sambo is a form of sport, self-defense, and combatives established in the former Soviet Union during the early twentieth century. Under the leadership of Sambo’s forefathers V.S. Oshchepkov, V.A. Spiridinov, and A. A. Kharlampiev, indigenous fighting styles from regions including Japan, China, Mongolia, India, Africa, Europe, North America, Caucasus, and Russia were studied

and blended into what is now known as Sambo.

After generations of civilian and military refinement, Sambo has evolved into an extremely formidable fighting art with principles applicable to martial artists of any style. Sambo’s arsenal includes, but is not limited to, strikes, joint locks, chokes, throws, ground fighting, and weapons. Like all fighting systems, Sambo continues to grow and evolve in both its sport and combat variants. 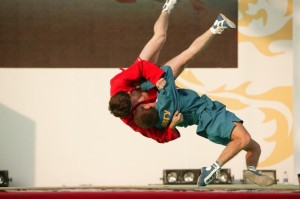 Sambo’s effectiveness lies in the student’s ability to master and flow with his or her own natural body movements. Inasmuch, Sambo training begins with an examination of one’s instinctive approaches to movement. Once the student begins to move freely and comfortably, alone and in tandem with other students, techniques are taught that synchronize with the student’s innate movement style and individual preferences. In Sambo training of this kind, techniques evolve out of and generate their power from fluid, confident, and comfortable understanding of physical movement, manipulation, and improvisation. Standardized technique is also critical, but can’t function without an intrinsic knowledge of one’s own movement styles.

This is not to say that strength, power, and technique do not play a role in Sambo. Quite the opposite, refined technique, power, and strategy are integral to Sambo’s effectiveness and training. As students progress, they begin to negotiate an individual balance between strength and movement – fortifying devastating strikes, throws, and combative techniques. In essence, every practitioner practices a system of Sambo unique to his or her self. Unlike most other martial arts, Sambo does not practice standardized kata or forms.

The American Sambo Association is dedicated to teaching the principles of Sport and Combat Sambo.

Carlos Cummings can be contacted at